IT WAS NO JOKE when the first NOVA Entertainment station in Australia went to air  in Sydney on the 1st of April, 2001. Built upon a Klotz AES3 digital audio infrastructure, the Sydney station marked the first of what is now a national network taking in Sydney, Melbourne, Brisbane, Perth and Adelaide under its flagship brands, the Nova Network and smoothfm.
Two decades later and Nova 96.9 in Sydney is at the cutting edge again as part of the Network’s ‘Future Studios Project’, embracing LAWO Ruby consoles and Power Core IP Audio I/O & DSP Nodes, Riedel’s MediorNet video router, the Riedel Artist comms system, Scala digital signage players, DMX lighting fixtures, and Panasonic PTZ cameras.
Under VSM control via LAWO’s VisTool touchscreen software, NOVA’s new Sydney studios, designed in conjunction with UK company Jago Design, are built to handle broadcast radio, podcast and social media workflows, as well as future proof the station for emerging content delivery platforms.
According to John Pearce (pic. right), Senior Solutions Architect with NOVA Entertainment, planning for the station upgrade began several years ago. “We took quite a lot of inspiration from other international radio and television studio builds,” he says. “We were very keen to have a system that was easy to operate, but yet provided the capability to provide more scale than what was actually in the back end.
“The scope of the project was essentially all of the core broadcast infrastructure. We wanted to make sure that it included an IP audio infrastructure. We considered IP video, but at that stage there were just no solid standards that we could rely on.
“We really came to look at what standards were available at that time and AES67 was key. We sort of could see SMPTE 2110 on the horizon, but there was nothing available for that just yet. We ended up going with an SDI video system, but in a modular way. We were concerned about having monolithic routers and the system not being as scalable as we needed, so we went with the Riedel MediorNet system which allowed us to scale the video at a more appropriate pace.
“We decided on the LAWO ecosystem for audio. That’s Ravenna-compatible, and we used Arista switches for clicking it altogether. All of our routing is done in Ravenna, and there’s edge devices that do format conversion to legacy equipment or to software virtual sound cards that interface to computers on that network as well.
“The decision to go down that LAWO path was not necessarily linked to any one specific benefit. It was more about the full suite of products that tied together and most closely matched what we were trying to do with audio, studio hardware, site level control and scheduling.”

PRODUCTION WORKFLOW
Regardless of the final delivery platform, the first step in NOVA’s content workflow begins with production staff accessing the studio via their RFID access cards, the same cards they would use to access the building. When a user is added to the building access system, that same card gets added and linked to their user account in the LAWO VisTool database.
VisTool has a national database that captures every setting from every system in the room, even outside of the audio system that it’s been designed to control.
“In the new design,” says John Pearce. “we’ve got the LAWO Ruby audio consoles and the Power Cores in the studios, the Riedel MediorNet video router in the MCR, the Riedel Artist comms system in the MCR, we’ve got the Scala digital signage players, DMX lighting fixtures in the roof, and VSM then has control of all of those systems. Our touchscreen software in the studio is LAWO’s VisTool. That talks directly to the Power Core in the studio. It also then talks to VSM and tells VSM what routes are required.
“We knew that we wanted to integrate video a lot more closely, and not just capturing video, but also signage, and being able to dynamically change signage and change the look and feel of a studio as quickly as we could.”
By doing so, NOVA is able to brand studios to match station ID, program and presenters, as well as program sponsors, enabling brand consistency across social media.
“Previously, we would need to book out a studio an hour or two in advance of the show, every day, and then have it configured and tested properly,” says Pearce. “We wanted to overcome that challenge in the new world.
“The screens in our studios are connected directly to the video router, so we can route anything to them – essentially video and still content, even a direct live video source like an interstate video link. Again, that’s all linked back to the user snapshot.”
As well as delivering live video streams to platforms such as Facebook Live or Instagram, the new studios also allow NOVA to create short-form video content for social media, all using using vMix live production and streaming software. And, while short-form content is post-produced, live streams are switched manually.
“The plan was always to have two methods to create that content,” says John Pearce. “For Facebook Live or Instagram or other live streams, that content is switched manually. We use vMix for that and, at the same time, capture all of the content, just the ISOs of all the cameras. We’re able to create the short-form content out of those.
“The manually switched content is generally the stuff that goes out in the moment. We’re still trying to fine tune the automation. It potentially will be better, at some point in the future, but right now it doesn’t always make the same decisions as someone sitting in front at a table. It’s all about context. Just because there’s audio coming out of one microphone doesn’t mean you want to switch to that shot.”

CONSTRUCTION THROUGH COVID
While the refit of existing studio facilities would have had its challenges in any given year, NOVA Entertainment’s new Sydney studios also faced the conditions imposed on it by the COVID-19 pandemic and its restrictions on the movement and gathering of people.
According to John Pearce, the build and commissioning of the new studios was “… a mighty challenge, especially with what we were doing where we were pushing the limits of some of the technology.we were also setting up systems using very new technology. There were a number of systems that we, and the manufacturer, turned on and quickly realised, that the way we were using it had never really been tested at the scale that we were trying to use it.
“Where, previously, we would have agreed with the manufacturer that the only way to solve some complex issues was to get an engineer on a plane and get here and resolve it, it ended up being lots of late nights for us on this side of the world on Teams chats, video conference sessions, and having people on this end as the eyes and the ears and the hands for those engineers.”
Also key to the rollout were local suppliers such as Professional Audio & Television (PAT) and Riedel, as well as the Sydney office of Scala, especially as State border closures limited the movements of NOVA’s interstate engineers.
“Obviously, like everyone, we were restricted by the amount of people that we had on site,” says Pearce. “The good thing about the config was that it could be done remotely, but we did still have the guys from PAT on site quite regularly, helping us with those teething issues that are inevitable in any project. When somebody’s put a comma instead of a full stop in a config, or something like that, you find these issues when you go to press the button. PAT, particularly, were incredibly helpful, both on-site and remote. Really, there wasn’t too many hiccups in terms of the support provided by those guys just because they were able to change the way that they operate and deliver the same service.
“The other challenge that we found with COVID was just the actual building works. We’d locked in building works from January, 2020, with a six month roll out period. By March, we were unsure if we were going to be able to continue to have trades on site. It was lots of seat of our pants stuff. We were watching the news daily, like everybody was. We were all concerned about the team’s welfare and what restrictions were going to be put in place to stop trades, potentially, from working.”
At the same time, COVID restrictions limited the number of production and technical staff allowed in the building, forced many to work remotely from home.
Most announcers were still keen to come into the station to broadcast from their studios,” says Pearce. “We did had provisions in place for all announcers to broadcast from home if that was their preference, or if COVID regulations required this to occur, but most had a desire to be in the studios, working with their teams and production staff.”
“We had a varied range of technology available to us because we had all of our outside broadcast equipment that we knew we weren’t going to be using anytime soon, and all the way down to Apps on iPhones the people could plug a headset into and contribute. So, for people that contributed the fewest number of minutes an hour, they’d be given less robust technology like a phone. Key talent, the ones whose names are on the signs, they were generally given more robust technology like a Tieline codec or something that had dual paths connected, one path to their home internet and other path to a 4G access point that we’d supply. We just looked at it as what was the risk of that talent becoming unavailable on-air due to a technical fault and just, distributing the technology as needed.
“It was a distraction from the builds of the new studios, but we were able to create enough kits to get everyone going.”

WHAT’S NEXT
“Now that the Sydney site has settled in nicely, we’re shifting our focus to Melbourne. The hope is that we will be able to roll out the same capabilities in Melbourne by early-mid 2022.
With more than just Sydney online, it will allow us to activate an even richer level of automation where the user RFID card studio logins will not just control local studio technology, but via LAWO’s Line Scheduler software, automatically connect audio, video, comms and control to any studio in the NOVA Entertainment network,” said Pearce.
‘The design philosophy of ‘Any Show Any Station Anywhere’ allows for each user to be assigned to a ‘show’ and then a ‘role’ within that show. A user can swipe into any studio and based on the requirements of their role, be merged with other members of their show.
“These automated capabilities will be complemented with a semi-automated version of the same features where for ad-hoc connectivity, users can open up a map of the country, select a site, select a studio and make a connection to that space with audio and video at the touch of a few buttons.
“This will further remove the actual underlying technology from the user’s vernacular and provide a much more intuitive interaction where the system orchestrates an outcome for them instead, as opposed to needing to understand codecs, routes, mix-minus, etc., which ultimately detracts from what they are there to do.” 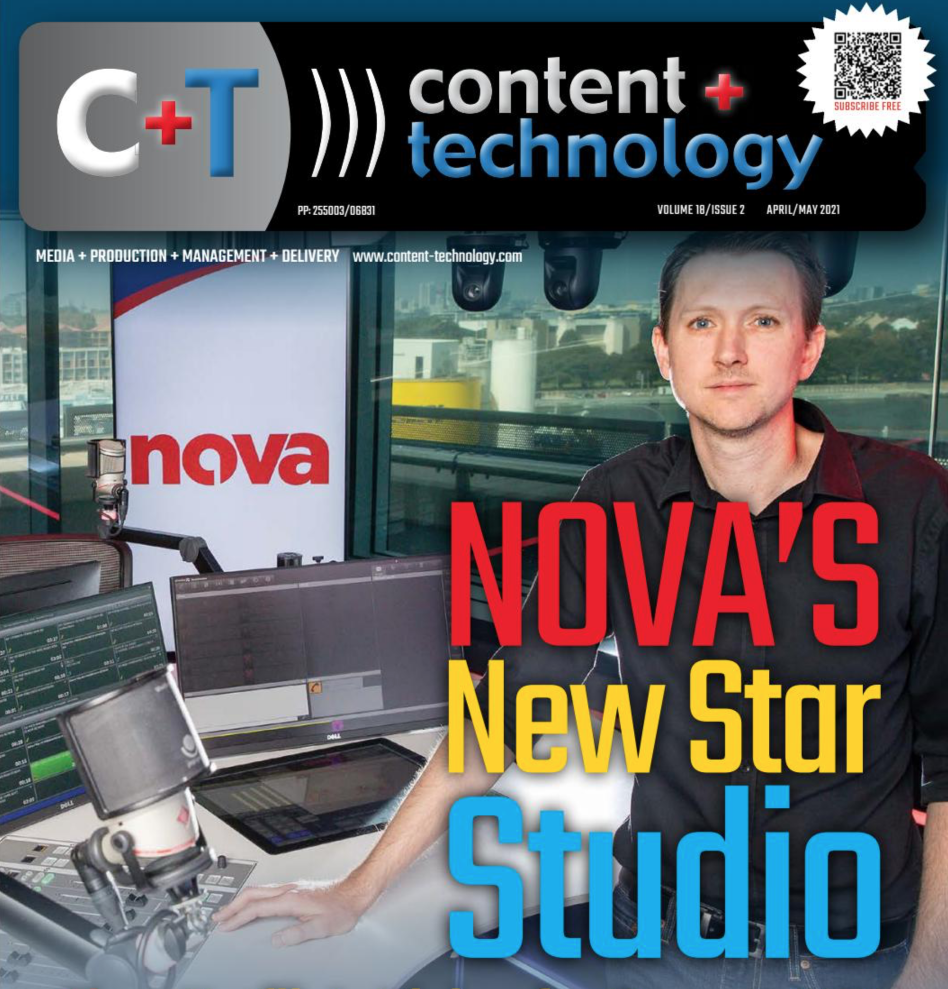 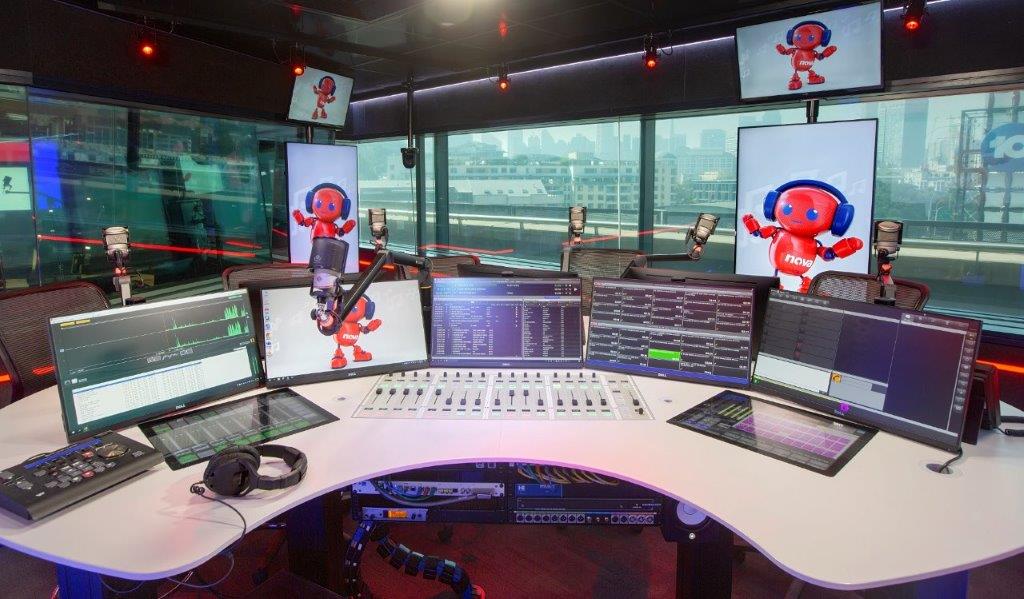 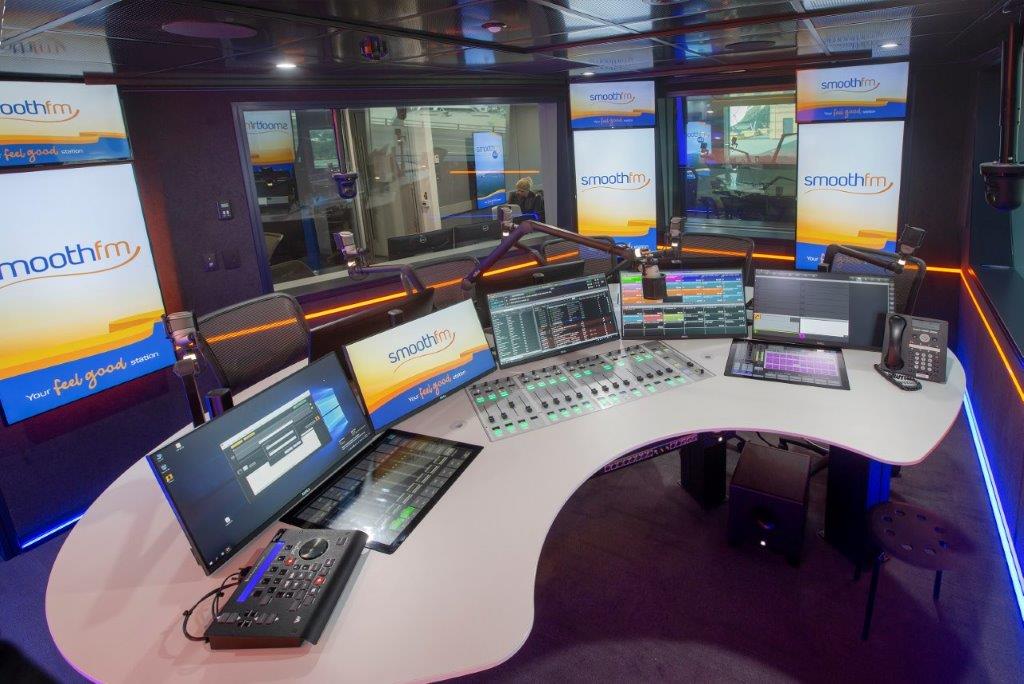 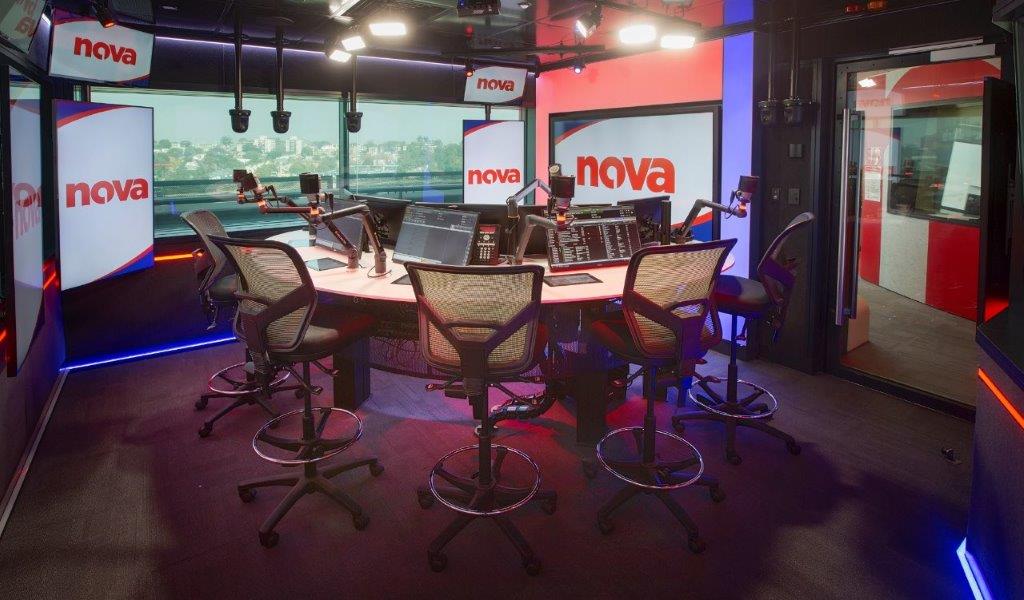